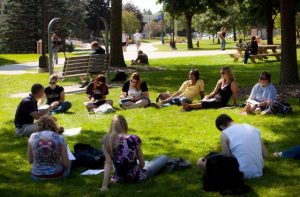 Some days it feels just too hot to sit in the classroom. If you have a nice patch of ground nearby, why don’t you take them outside and allow the change of scenery to stimulate their imaginations? Here are ten outdoor activities which need little or no preparation.

Make a list of items for your students to find and arrange to meet them at a rendezvous point 30-45 minutes later. Then you can go through the list and have them tell you where they found each thing. You could have them take photographic evidence too. See the post Scavenger Hunt for more information and an example list of things which need to be found.

Make a list of words you want students to review and cut them up into individual slips of paper (or use one of our pre-prepared lists on the Taboo page). I wouldn’t play full-scale team taboo outside, you’re liable to have the game abruptly ended by a strong gust of wind. Instead, give each student three slips of paper and allow them to swap out words they’re not sure of (or look them up in a dictionary). Now have them sit in a circle and describe the word they are holding. The other students shout out when they think they know what is being described. If it’s not too bright, you could also bring a tablet computer and play Picture Taboo.

Stand up if you’ve never…

This is my favourite ESL game and works very well in an outdoor setting. Students have to think of three things they have done, which nobody else has and then challenge the others to stand up if you have never … If the student is the only one standing then they get a point. You’ll need a pen and paper to keep track of the score. For a fuller explanation see this post.

Before you venture outside give each student three slips of paper and ask them to write down something (anything) which they think would be interesting to discuss. Put the idea slips into a cup and when you’re outside, sit in a circle and go around asking each student to take out a slip and start a conversation/discussion about the topic at hand. See this post for more detailed instructions.

If you know this game, then no explanation is needed. But if this car-journey boredom-killer never reached the shores from which you hail; it is played like this. A student starts and says I spy with my little eye something beginning with… and after identifying a suitable noun in the local environment, names the letter of the alphabet which it begins with, for example, S. The other students take it in turns to try to guess what the student  has seen spider, socks, sun, sandals, etc. If/when a student correctly identifies the object, he or she chooses the next object. If it starts to drag on, have the student give little hints to help the others out.

Another quick and simple game that can lead to a lot of laughter. Students sit in a circle and the first student says any word which comes to mind. The next student must say a word which somehow relates to the previous word. For example, orange, apple, snow white, Disney, Hollywood, Tom Cruise, Scientology, etc. After a while stop the game and see if the students can reconstruct the words used but in a backwards order from where the game ended.

You’ll need a pack of cards or some slips of paper to play this game. Deal every student a card, making sure that one of the students receives a Joker. Tell the students that whoever has the Joker must lie, they are not allowed to tell the truth. Now go around the circle with each student trying to identify the liar by asking a question to the student they suspect. After a while, the students should be able to hone in on the liar. See the Poker Face post for a slightly more detailed explanation.

How many sounds can you hear?

The students will need a pen and paper. Have them sit in total silence for one minute and try to notice and write down every sound in their environment. Then find out which student has the keenest hearing.

I’m going on a picnic and I’m taking …

Start the game off by announcing that you are going on a picnic and taking a particular object, e.g., an aeroplane. Students ask if you are taking other objects, while you occasionally add further objects to the list of items which you are taking such as apples, an anaconda, an Aston Martin. Hopefully, students will eventually deduce the rule (in this case the object must begin with the letter A) and can lead the next round themselves. See this page for a slightly more detailed explanation.

This is a fun, longer activity for practising past tenses. Explain to students that a serious crime has been committed and that the criminal is sitting amongst them today. Put students into pairs and explain that they need to create a story together to persuade the police that they couldn’t have committed the hideous crime. They will need to think about where they were, what time they arrived and left, what they were wearing, and any other details they can think of. When every pair has concocted their stories. Choose the first pair to be interrogated. One of the pair must leave and wait somewhere out of earshot. The remaining partner is now interrogated by the other students. After a while bring back the excluded partner and have the students perform the interrogation again. The first interrogated partner is not allowed to speak during this period. During this process, it will become clear how much their stories corroborate with each other.

Repeat this procedure for each pair of students and at the end ask the class as a whole to decide on which pair they think are the guilty parties. See the Alibi post for a more detailed explanation.