This is a  fun preposition game which enables learners to practice and uncover new prepositions of position as well as picking up some useful new vocabulary. It requires a bit of effort to prepare but this is usually rewarded by a heightened level of involvement and output from the learners.

Two groups (of one to three students) take part in this activity. The other students can get on with a separate task while they wait their turn.

First the tricky part, you need to erect a barrier (about 40cm high) down the centre of a desk. The barrier stops the group on one side of the desk from seeing what the group on the other side is doing. One solution is to prop up a large piece of cardboard between some books. 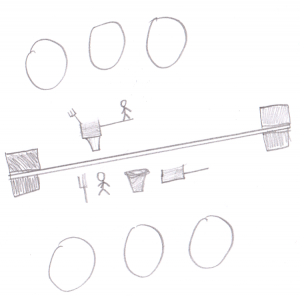 You will also need two sets of identical objects. I bought a stash of things from a €1 shop including, two mini frying pans, two screwdrivers, two figurines, two sets of knives and forks etc.

Seat a group of students on each side of the barrier with their half of the objects in front of them. The barricade should be high enough that the seated students are unable to see what their counterparts are constructing.

The first connects the objects together in some way in order to build a relatively stable structure When the structure is complete, they must now give group B instructions which will enable them to replicate their structure. For example:

Team B can ask questions to help them determine the nature of the structure and when they’re satisfied that they have replicated it, the barrier can be removed and the structures can be compared.