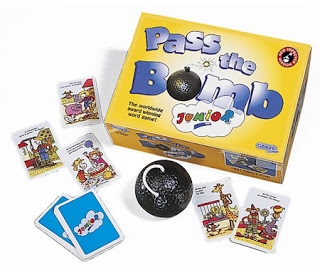 Update: Sadly this game seems to have been discontinued. Check out your local eBay and you may be able to pick up a second hand version.

Pass the Bomb (Junior edition) is the perfect ESL warmer or filler and never fails to inject a bit of energy into a tired classroom. This lively vocabulary game works equally well with both children and adults.

If the lesson’s starting to drag, or towards the end of the class to send them off with a smile on their face and a spring in their step.

Pass the Bomb is a simple word game. In the box, you get a little battery powered bomb  and a pack of illustrated cards which show different situations or locations (On the dining table, In the bathroom, At the beach,etc.)

Take a card at ‘random’ (sometimes I fix the game according to the level of the students or vocabulary I want to practice), for example, In a suitcase and show it to the students. Give them a few moments to digest the theme and then press the little red button on the bottom of the bomb. The bomb will start ticking.

After a gap of between 20 and 120 seconds, the bomb goes ‘off’ with an explosive sound effect. The person holding the bomb when it explodes gets the card which is in play and the game restarts with the next person and a new card.

The winner is the person with the fewest cards after the final round.

Be sure to pick up the junior edition. The standard version doesn’t come with picture cards, instead opting for cards showing letters which must be used to make valid words, great fun with native speakers, but a little challenging for all but the most advanced classes.