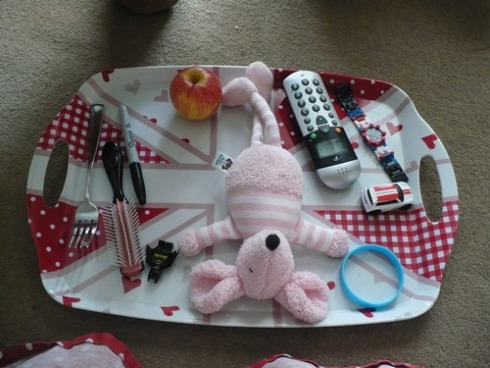 Kim’s game is an old-time memory game that can be used for reviewing there is and there is/are/was/were and for introducing some useful vocabulary for common household objects.

You will need a tray, a tea towel and about 15 different, common, household objects (some in multiples). For example, a battery, a light bulb, some coins, two teaspoons, a lighter, a tea bag, a fork, an eraser, some rubber bands, a coaster etc. The collection of objects must be able to fit together on the tray and be hidden under the tea towel.

Introduce the verb remember and the noun memory and ask the class if they think they have good memories. How many telephone numbers they can remember, etc. Tell them you are going to test how good they are at remembering with a memory test.

Produce the tray on which are laid the objects covered up by the tea towel. Ask students to come and stand around the tray and tell them that they will have one minute to try and remember as many items as they can. Then they must return to their desks and write down as many objects as they can remember. If they don’t know the English word for the object they can write it down in their own language or draw a picture.

Remove the tea towel for  30 seconds and then send students back to their desks and give them two minutes to write their lists.

Find out who has the best memory by seeing which students have remembered the largest number of objects. It’s unlikely that any will have all 15.

Tell the students how many objects they should have on their list (15), see if together with their neighbour they can remember all 15 objects and how many they know the English word for.

To use this activity as an inroduction to the past simple tense,  later in the class, ask students how many of the objects they can still remember. Elicit the past tense forms of is /are and encourage students to reply using there was and there were.

Try it again at the beginning of the next lesson and see if they can still remember all the objects and associated vocabulary.