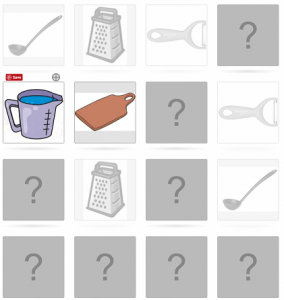 As well as helping students to remember the names of different items, this memory game (sometimes known as Pelmanism) is also great for practising prepositions of position.

Before playing, point at some of the different unturned cards and try to elicit from the students how they could describe the position of the cards. For example on the second row on the left, the second card on the bottom row, in the top right-hand corner. Click on one of the cards and now elicit examples of some more prepositions which they could now use. Such as under, next to, above, right of … etc.

Explain the aim of the game which is to find all the pairs of identical cards with only two cards being visible at any time.

Go round the class asking each student in turn to choose the next two cards to turn over. Encourage the rest of the class to give their suggestions too.

You can make your own versions of this game with an excellent tool from h5p.org.